After years of telling myself, “I don’t really need a mechanical keyboard.” I caved and brought home Corsair’s K70 Vengeance Gaming Keyboard with Cherry MX Brown switches.  And in all honesty, it was so worth it.  Considering it’s the first mechanical keyboard I have ever bought, I don’t have a reference point for the performance standards on these types of keyboards but I can definitely tell you my own experience over the past three weeks.

No, it doesn’t come with literal bells/whistles but it does feature 100% mechanical, fully-lit LED backlighting which is KEY-by-KEY adjustable, all in a black anodized aluminum chassis which I thought was pretty fancy shmancy.  The attention to detail was shown with the textured WASD and space keys as well as the scrollable volume roll.  LED brightness is adjustable and the USB power cord is braided to prevent tears, unlike those apple earphones that always eventually expose my ears to electrocution. 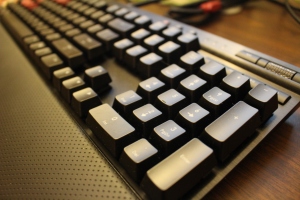 A lot of people tend to opt for the Red/Blue switches but after doing a bit of research (links on bottom if you’d like to know too), I thought the browns were better suited for my everyday tasks.  And in response to my choice, it has never been so satisfying to hear the clicking sounds of keys when I type.  You eventually start noticing the bumpy feeling (strength of the actuation force depends on switches) of your keys when pressed which is quite nice in indicating you’ve pressed the key properly.  For someone who has always used the built-in laptop keyboards and the self-proclaimed “ergonomic” keyboards of macs, the transition to mechanical keys has been a luxury.

It is a full-length keyboard so there a full keypad is included as well as dedicated media controls for when you want to instantly jam on your hot mixtape without having to click on Itunes and whatnot.  The the top left of the media keys are your Num, Caps, and Scroll Lock indicators as well as the Windows button lock key and LED adjustment button.  Branching off from the power cord is a rollover USB plug that allows you to use the USB dock that comes built in the keyboard.  Lastly, all keys prevent ghosting which means each keystroke will be accurately translated into gameplay even when multiple keys are pressed so happy button mashing!^^